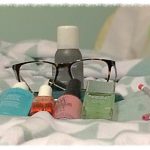 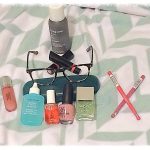 Zenni Optical Glasses: In February, I finally got my eyes checked out because it was WAY past due. It was also time for some new glasses and I decided to look at Zenni Optical. I absolutely LOVE this site. They have really cute styles for both men and women and the best thing about them is they are really inexpensive. I basically got three pairs of glasses for close to $60! Now, at this point I kind of regret part of this purchase because I decided to go with the clip-on sunglasses. Well, it turns out that these are a pain to use. But now that I know this, I have now picked out a pair of actual sunglasses. Another great thing about this is that any of the glasses can be turned into sunglasses. For my eyeglass wearing followers out there who are tired of spending hundreds of dollars on a pair of glasses, I’d say go check this site out. You will not regret it 🙂

Essie Apricot Cuticle Oil: I used to get THE worst hangnails and absolutely hated doing anything with my nails because they just would look like crap. Then this product came into my life and I haven’t had a single hangnail since. This stuff has literally changed the health of my nails. I get better looking manicures that last much longer than they used to when I did my nails. I highly recommend this product if you experience the same issues I did.

OPI Nail Envy in Hawaiian Orchid: I bought this product because I had the worst nails. They were always brittle, especially during the winter months, and my nail polish would never last. This stuff worked wonders! Plus, it’s a beautiful color. It’s kind of a dusky, purply pink. The best part of this product is that it helps your nails grow longer and stronger. It’s great!

Sally Hansen Instant Cuticle Remover: For some reason, I have a ton of cuticle to get rid of when I do my nails. I don’t know what it is about my nails, I guess it’s just what it is. Anyway, this stuff helps a ton and it’s super easy to use. All you have to do is squeeze it around your nails and let it sit for 15 seconds. Once it has done its thing, you just push the cuticle back and wash your hands. It’s basically the same stuff the nail salons use to push back your cuticles, but in a much more inexpensive form.

H&M Glass Nail File: I have been using regular nail files for a very long time and found that they just didn’t do the best job. I was watching a few beauty Youtubers and they introduced glass nail files to me. These work wonders! They give me a cleaner file and are reusable. All you have to do is clean them. Now this H&M one is probably one of the cheaper versions of them, but it still gets the job done 🙂

Living Proof Dry Shampoo: I have been using dry shampoo for awhile now and I have tried a few different brands. Some I have liked and some not so much. Before this brand, I was using the Dove brand but was finding that the build-up in my hair was making it kind of gross. So, I decided to try out a higher-end brand. This when I heard about Living Proof and how much everyone was raving about it. And, now I am raving about it. It is a lighter formula than the Dove brand and smells like you’ve walked out of a salon. It doesn’t have the grimy build-up like the Dove brand either. The one thing I will recommend is that if you want to try it, get the travel size before deciding fully on the full-size. This is because it’s on the more expensive side.

Lularoe Tops: I want to thank my friend Susan for this favorite. She invited me to a pop-up boutique for this brand and I fell in love. I will be doing a separate post on these, so the only thing I will say here is that I have been living in these tops since I bought them.

Rimmel The Only 1 Lipsticks in Peachy-Beachy & Naughty Nude: I was looking through my makeup collection and found that I have an obsession with lip products. It is one of my favorite makeup items and these are no exception. These are new to the Rimmel brand and I LURVE them 🙂 They are soo buttery smooth and the colors are gorgeous. I bought one really bright color, Peachy-Beachy, and one neutral color, Naughty Nude.

Revlon Matte Lipstick in Seduction: I have one of these in a red color, but I really wanted to find one in a neutral color because I find that sometimes I just need an everyday lipstick. These are great because they last soo long and look great on. The only issue I have with this color is that if I’m not wearing any makeup it washes me out.

NAILS INC. NAILKALE Base Coat: This product has done wonders for my nails as well. It keeps my nails looking healthy and is probably the best base coat I have ever used. It is on the high-end of the price spectrum, but I think it’s worth it. Plus, I’m finding NAILS INC. is a great brand.

Rimmel Exaggerate Lip Liners in Eastend Snob & Peachy-Beachy: When I was buying the other lip products mentioned above, I decided to get some lip liners as well. I have heard really good things about these in particular and decided to try them out. I have found that they really are awesome products. I knew going in that I wanted to try the Eastend Snob shade, but I kind of picked at random the Peachy-Beachy shade. The funny thing about the second shade is that as soon as I got home I noticed that the Rimmel lipstick I bought was the same color. I swear I did not plan it 🙂 Anyway, If you want a really good drugstore brand lip liner, I would go with these.

Starbucks Iced Coffee with Milk & Vanilla Frappuccinos (Light versions): In the beginning of the month, I was super obsessed with these two drinks. I am a big fan of Starbucks to begin with, but these are nice because you don’t have do anything except put them in the fridge and they are ready. I will admit though that they aren’t the healthiest or the same as going into an actual Starbucks.

Lean Cuisine Sesame Chicken Frozen Meal: For months now, I have been going back to this meal in the freezer section. But it just seemed throughout April, it was the only thing I was picking out for lunch. (These are usually about $2.99/piece)

Raisin Bran: I love all kinds of cereal, but there was just something about April that all I would eat for cereal was Raisin Bran. I usually go through phases of eating just one kind and there is no exception with this one. It’s just soo good!

Shadowhunters: I would have to say that I am beyond obsessed with this universe. I have seen the movie and am currently in the process of reading the book series that this TV show is based on. I have always really liked supernatural shows and I can now add this one to that list. This show is based on the The Mortal Instruments book series by Cassandra Clare. It’s on Freeform, formerly ABC Family, and I have to say that it’s the perfect network for it. If you have already read the books, unlike me, you will love this show. This show has actually sparked me to read the book series. I don’t want to say too much more because I don’t want to give anything away. All I’ll say is that if you’re a fan of supernatural shows as much as I am, or a fan of the books, you will not be disappointed.

My Big Fat Greek Wedding 2: I was a fan of the first movie and was super excited to hear that a second one was coming out. This one did not disappoint. It was just as funny, if not more so, as the first.

Snapchat: I am usually behind on all the trends either on purpose or by accident. This one was on purpose. I just didn’t see why I needed to download this app, until I did 🙂 I absolutely love it! My favorite snaps right now are from Harry Shum Jr. and Gina Rodriguez. They are just soo hilarious and fun to watch. But who are we kidding? I love watching all the snaps I’m following. Now, I haven’t tried doing any of my own snaps, but if you want me too I will. I think it would be a great foray into Youtube for me.

Spotify: This one is more of a rediscovery favorite because I have had Spotify for awhile now. Part of the reason I started using Spotify again was because I was tired of listening to the same songs over and over again on the radio. It’s also great for discovering new music. I will link my Spotify either on here or on Twitter so you can see what I’m listening to 🙂

War of Hearts-Ruelle: What can I say about not only this song, but also this artist? She is amazing and so is this song! Just go listen.

Symptoms of Being Human by Jeff Garvin: I read this book for book club and I just loved it. It was something different than I usually pickup to read. It’s about a teenager who is gender-fluid and the struggles/issues that come along with that journey. I highly recommend picking this up and reading it. Especially since it’s so relevant to what’s going on in our society right now.

Naomi & Ely’s No Kiss List: Honestly, I watched this movie one night because I was bored and it had been on my Netflix list forever. It’s a cute indie film about these two best friends, Naomi and Ely, who are struggling to find time for each other during their freshman year of college. A lot of us have been through this and so I found this movie rang true for me.

#Malec a.k.a. Harry Shum Jr. & Matt Daddario a.k.a. Magnus & Alec: Oh boy! What can I say? This coincides with my obsession with Shadowhunters, mentioned above. Not only do I love the actors who play these characters, but I just love the characters as well. Honestly, just read the books and watch the show. You’ll see what I’m talking about 🙂